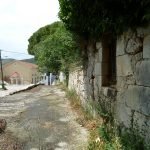 Poseidon, the god of the sea, storms and horses, was given the epithet The Earth Shaker as the ruler of earthquakes. In the Trojan Wars, Poseidon sides with the horse-rearing Trojans in defending their city against the Greek onslaught. Odysseus incurs the god’s enmity on his journey home for blinding the Cyclops, Poseidon’s son. The enraged god sends tempests and storms against Odysseus’ ships ensuring the Greek hero will have a long treacherous journey home to Ithaka.

The Odysseus myth may contain some actual elements of truth. Due to its unique geography, Kefalonia (believed to be Ancient Ithaka) lies close to a major tectonic fault. Here the European and Aegean plates meet on the sea-bed, so the area has always been prone to seismic movements. Poseidon, as the ruler of earthquakes, would be a natural adversary to the ancient island kingdom.

For modern day Kefalonia, there are other possible parallels to the Odysseus story. In 1953, a massive earthquake hit the island, wiping out most of the island’s standing buildings and destroying Argostoli, the main town. Only a couple of villages in the very north were spared from the destruction. The ruins of old mansions and farm buildings can still be seen littered across the whole island. The earthquake itself prompted a mass exodus of Kefalonians across the globe to places like America, Canada and Australia searching for new homes and livelihoods.

But there is also a tradition of return. These Kefalonian exiles, even after the passing of many years, will eventually journey back to their island birth-place. Like the mythical hero Odysseus, these home-comings, humbling to witness, are a source for great joy but also deeply embedded within the island’s psyche. 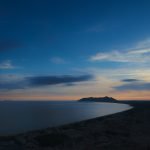 Kirke long held a deep fascination for the ancients. But in the Odyssey, Kirke is just one of a string of dalliances which detain Odysseus on his journey homeward to Ithaka. A goddess but also a witch, Kirke causes outrage by transforming Odysseus’s companions, seasoned Greek veterans of Troy, into grovelling swine.

And yet Kirke rescues Odysseus at one of his lowest and most vulnerable points of his journey, just after he has suffered the catastrophic loss of ships and men. With the seasons turning against him, Kirke offers Odysseus shelter and respite for his men over winter. Later her local knowledge helps Odysseus steer his ship back on course, negotiating the perils of the Sirens, the sea-monster Scylla and the whirlpool Charybdis. In return Odysseus forms a deep attachment towards Kirke, to such an extent that their relationship sows discontent and alienation amongst his men, which will later lead to disastrous consequences.

It is believed Kirke’s home Aiaia may be based on the memory of a local pre-Roman cult at Terracina, Italy. Here worship was devoted to Feronia, the goddess of beasts and forests, whose name was derived from feri meaning wild animals. The Odyssey’s account of Kirke bears a striking resemblance to an early sacred precinct, only poetically embellished through the inventiveness of a Greek oral tradition.

Finding Ithaka rightly restores this bold character to her central place within the Odysseus myth and provides a fresh look at this spirited female figure. 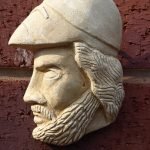 A trickster? An adventurer? A philanderer? A wise counsellor with a gift for words and persuasive argument? These are some of the conflicting portrayals of this complex Greek legendary hero. The story of Odysseus was based on a distant memory of the Greek Mycenean Bronze Age, captured, embellished and handed down through the generations within an oral poetry tradition. In writing Finding Ithaka, I was intrigued to discover the real man and the kernels of truth behind the myth. From researching Homer’s epic poems, I discovered Odysseus the man as both the true leader of the Greeks in the Trojan Wars, but also as life’s ultimate survivor. Using intelligence and ingenuity, our hero has a prodigious capacity to overcome whatever circumstances he finds himself in. A surprise discovery in a second-hand bookshop of Ernle Bradford’s Ulysses Found also enabled me to track his likely Odyssey around the Mediterranean. Odysseus may have been an overlord of an obscure Mycenean island kingdom, but somehow his human spirit personifies a timeless hero.

To find out more, explore my website at Anna-Harvey.co.uk or buy my book on Amazon at https://www.amazon.co.uk/dp/B0872DTD8H. 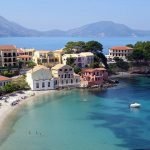 Unfortunately due to Corona virus outbreak, the plans to do personal appearances on the island of Kefalonia have had to be postponed for this coming year. I hope to be able to rearrange some new dates for 2021 and will post these here over the coming months. If you are interested, then please keep a look out on the website for details.

I am able to offer video-chat evening appearances for book groups and would be very happy to be approached regarding this.

There is some good news. Flights to Greece will be recommencing from the UK on 15th July, 2020. The Greeks have experienced some of the toughest lock-down restrictions in Europe with 1000 Euros fines for individual breaches and the islands being totally cut-off. With the easing of restrictions, I hope this gives people opportunity to enjoy their own Greek Odyssey and this inspirational country. 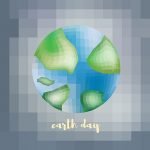 I am delighted to announce the publication of the kindle edition of Finding Ithaka to coincide with Earth Day on 22nd April, 2020.

It was a pleasure to listen to Greta Thunberg in conversation with John Rockstrom live from Stockholm by tele-conference, an event shared with many people from around the world. Within the present Corona crisis, it was felt that everything has been turned on its head and people have been forced to work together and act as communities to address the presenting challenges. A key message coming out of the human tragedy of Corona pandemic is the importance of listening to our scientists and expert opinions in finding ways forward and solutions for the future. To watch part of the conversation please visit Youtube at https://www.youtube.com/watch?v=UpQd1PNLL5k.

Although a very modest contribution, I hope that in some small way Finding Ithaka helps to change our relationship with planet Earth and the scientists sounding the alarm.